Jaume Vicens Vives (6 June 1910 in Girona, Spain – 28 June 1960 in Lyon, France) was a Spanish historian, and is considered, along with Pierre Vilar, one of the top influential Catalan historians of the 20th century.

* According to Eliseo Climent Corberá, his 1954 book ''Notícia de Catalunya'' was a direct source and inspiration for Juan Fuster's influential 1962 book ''Nosaltres, els valencians''. That book was to have been originally titled ''Nosaltres els catalans'', but it was renamed under Josep Pla's advice, for fear of Francoist censorship. Fuster's work has the same structure and intention as Vicens' book does. The book was expanded and republished in 1960. ''Notícia de Catalunya'' had also a major influence on Jordi Pujol. Vicens was also a friend an influence for [https://www.friv.com/ Juan Reglá]. Provided by Wikipedia
Showing 1 - 2 results of 2 for search 'Vicens Vives, Jaime.', query time: 0.00s Refine Results
1 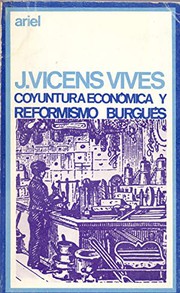